All of the children from whom we collected data for NP3 owned or had shared access to at least one mobile device at home. However, one High SES girl, who attended a private school that had a 1:1 iPad strategy, reported that she was not allowed to use her iPad at home and was not allowed to have any other digital devices until she was 13. The head of ICT in one of the two independent schools involved in the project commented that they had several parents who did not allow their children to use digital technology at home.

Overall, there didn't seem to be a clear difference in the level of access to digital technology at home between the children in this study, except for a minority of 'High SES' children whose access was very limited. This is illustrated by the orange line in the diagram below. 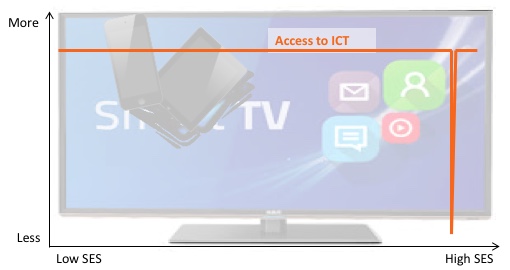 There did appear to be a difference between the amount of 'spare time' that children from Low and High SES contexts had. The children from High SES contexts appeared to spend a considerable amount of time in school (e.g. at homework club and extra curricula activities), often getting to school by 8am and not leaving until 6pm or later. They also took part in many other organised activities outside school (e.g. swimming lessons, horse riding, drama club, ballet lessons). This meant that these children had very little 'spare' time at home during which they could use digital technology. Even where children from Low SES contexts attended breakfast clubs or stayed to after school clubs they tended to spend less time in school and appeared to engage in many fewer organised activities outside school. Thus, they had more 'spare' time during which they could potentially use digital technology outside school. This is reflected in the green line in the diagram below. 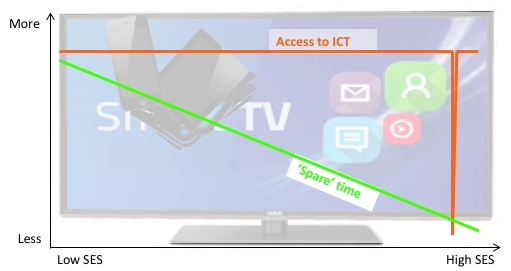 In addition to limits on the time spent using digital technology, other rules and restrictions were often imposed, in particular in relation to access to the Internet and social media. Parents from children in High SES contexts appeared to impose tighter constraints and to have more sophisticated mechanisms for managing their children's access to the Internet and social media. For example, by having separate WiFi networks at home for the parents and children so that they could turn off the children's Internet access and/or impose tight controls and filters on it. Parents from High SES backgrounds also appeared to more closely monitor their children's Internet use, including checking their social media messages (sometimes covertly). In one case the parents had installed software that allowed them to monitor what their child was doing on their devices remotely. This difference in rules, restrictions and monitoring is represented by the blue line in the diagram below. 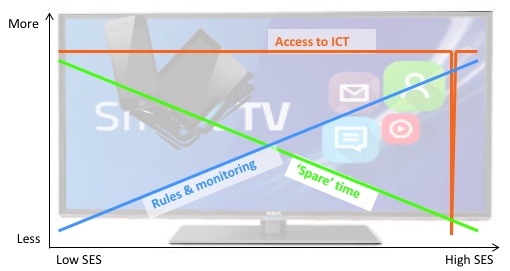 Opportunity to use digital technology 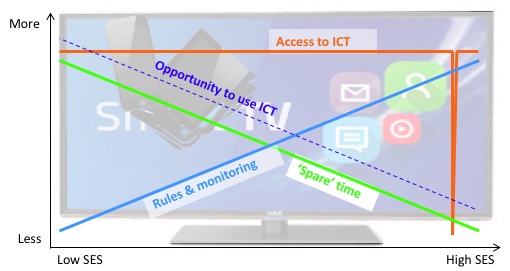 The children were not representative of all primary school children. They were children who the schools thought were doing interesting things with digital technology and/or whose parents were willing and able to come in to school for a one to one interview. Clearly, there are children, who were not included in this data, who do not have any access to digital technology at home and whose opportunities to use digital technology outside school are severely restricted.

Children were loosely categories as Low SES if 'on pupil premium' and High SES if they attended a private school. However, data on pupil premium was not provided for all of the children.

The lines in the diagrams above are straight, however the relationships between SES and access, 'spare' time, and rules, restrictions and monitoring were much more complex than this suggests.

This account of the data does not say anything about the level of support that was available to the children and this clearly impacts on the opportunity they have to become sophisticated users of digital technology.

Not withstanding the limitations with the data and how it is represented in the diagrams above, this research does at the very least suggest that we need to be more circumspect when it comes to our thinking about the relationship between SES and opportunities to use digital technology outside school.

The relationship is probably much more complex than an assumption that 'Low SES' means less opportunity to use digital technology at home.