The Structure of Observed Learning Outcomes (SOLO) taxonomy was developed by John Biggs and Kevin Collis (1982) to support the assessment of learning, by identifying the sophistication of the learner’s understanding (mental model). This post suggests a couple of shortcomings of the taxonomy and a revised taxonomy (SOLO2.0) which helps to address them.

The figure below shows the SOLO taxonomy (on the left), and the revised version (SOLO2.0) on the right.

The first, and most significant issue is the size of the jump in complexity from Relational to Extended Abstract.  Indeed, this problem is hinted at by the label ‘Extended Abstract’, which suggests an intermediary stage (Abstract). John Biggs himself seems to acknowledge this problem by his observation that Relational can be sub-divided into 'bare Relational' and 'very rich Relational', but that there is a qualitative shift between 'very rich Relational' and Extended Abstract (Personal communication, 1st September 2022). Sub-dividing Relational seems to miss the point.  Relational describes a concrete model - a rich description of a specific instance of a phenomena - as such it is qualitatively similar to Uni- and Multi-structural. The major jump is from such a concrete model - a description of a specific instance - to an abstract model that can be generalised to different domains (Extended Abstract). 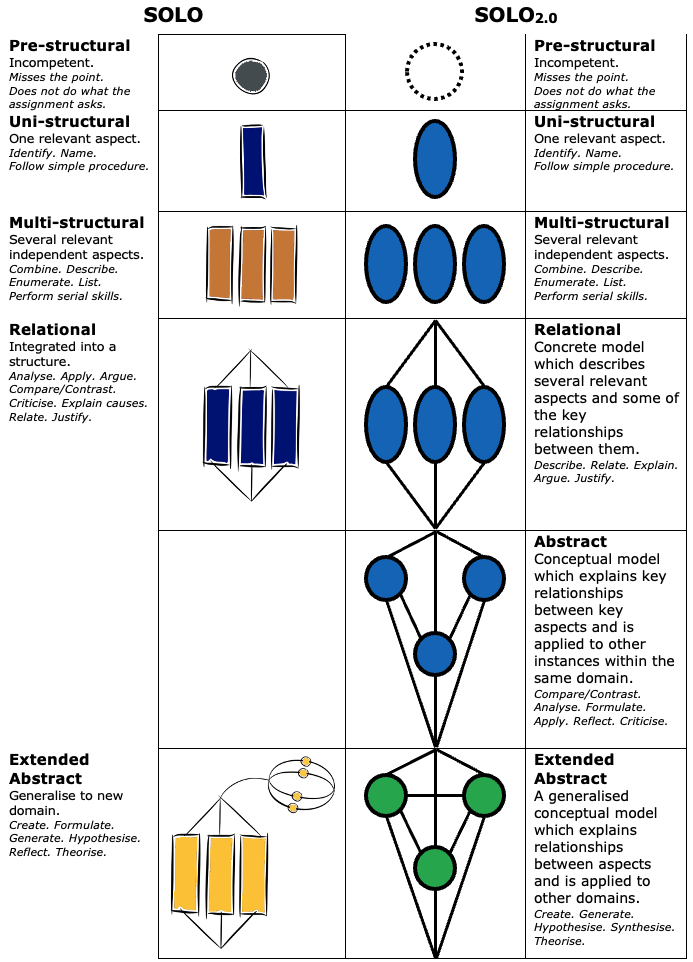 Logic suggests that an intermediary stage exists, in which one has a conceptual model that can be applied to other instances of the phenomena within the same domain (Abstract), but which cannot or in practice has not been generalised to different domains (Extended Abstract). Thus, SOLO2.0 adds in another classification between Relational and Extended Abstract. The new category of Abstract requires that the concrete model provided in Relational has been analysed to provide a conceptual model that includes key relationships between the generalised aspects of the model. Thus, in moving from Relational to Abstract one moves from descriptions of several relevant aspects of the specific instance to a conceptual model that identifies key relationships and is applied to other instances of the phenomena within the same domain. Extended Abstract, as its name suggests, extends the Abstract categorisation by providing a generalised conceptual model that fully explains the phenomenon and is applied in other domains.

The second issue with the SOLO taxonomy, is less significant and is specific to contexts which have a standard grading scale that does not map clearly onto SOLO. For example, my institution has five grade bands - Fail, Pass, Credit, Distinction, and Higher Distinction - whilst other institutions also distinguish between  a serious fail in which the assignment does not address the assessment brief (i.e. equivalent to a mark of 0) and a fail. The original five SOLO categories do not map easily onto these sorts of grading scales.

If you take Multi-structural to be the pass grade. Then SOLO has two further bands (Relational and Extended Abstract), whilst most other grading systems have three additional bands (Credit, Distinction, and Higher Distinction). The addition of the Abstract band in SOLO2.0 overcomes this problem: