The Funnel of Influence from The Context

We know that there are many different influences affecting a Context. For example, if we think ‘big picture’ we can recognise the effects of Culture, Politics, Global Shifts, Economics, Media, Law and Government Policy. We can also recognise national and cultural beliefs and norms about the nature of childhood and what ‘being a child’ means in a particular location. We can recognise that there are national and cultural norms about the roles of work, family, education, social interaction and the uses of technology. These are the kinds of things that highlight the differences between contexts located in central metropolitan London, indigenous Australian outback and a remote village in China. Lave (1988) refers to these features as the ‘Constitutive Order’ and all of the influences outlined above help to shape who we are and what we do – both in terms of how we are born and grow up, and also how we live our lives today.

Within a particular Constitutive Order, we can zoom in to a more specific context (e.g. a home, school, workplace, club, shop). Each of these has its own enduring human and physical features – facilities, routines, expectations, staffing – things that remain stable over a period of time. Lave (1988) refers to this as the ‘Arena’ – we can think of it as a space where actors (people), scripts (objects) and plots (routines) combine to set the scene for a particular story to be told.

There is a difference between the long term stable features of an Arena, and the shorter term changeable yet still stable features of the context. Lave (1988) referred to this as the Setting – where people within an Arena interact with each other. However, we might separate out the features which are stable (e.g. classroom furniture, available resources, the children and adults who represent a particular class), and the features that are situational to the Moment of Practice. For example – not everyone will interpret the presence of 15 iPads in a classroom in the same way – for some it will be seen as a useful and powerful resource, for others a stressful burden, and for others something to consciously avoid engaging with. Another good example is the absence of a child in the class – they still form part of conceptualising ‘the class’ (and thus will inform the teacher’s planning and thinking) even if they are absent on the day of the observed lesson. Thus we can separate Lave’s Setting into two parts – Stable and Situational.

So within the Funnel of Influences from The Context, we can see how it is possible to refine an undefined Context into distinct components of Constitutive Order, Arena, Setting (Stable features) and Opportunities. All of which allow us to identify tangible aspects that can be unpacked.

The Funnel of Influences from The Self

Drawing on the work of Abercrombie (1993) and Nias (1993), the Funnels of Influence from The Self begins with what we can describe as our Roots. These are the influences that shape our formative years from birth (arguably from pre-birth). For example, the social ideologies, norms, values and belief systems that we are born into, the culture and sub-culture that we are raised within, and the associated culturally informed elements of self (such as age, gender, health). These all shape what Rogers and Scott (2008) call our Substantial Self – the version of ourselves that makes meaning from experiences that we live through.

We then consider the role of all the experiences that an individual has prior to the Moment of Practice that is being focused upon. The Funnels of Influence refers to this as our Growth and there are two important features to consider within it. First, Esteban-Guitart and Moll (2014), introduced the idea of Funds of Knowledge and Funds of Identity – the gathering of experiences which accumulate and shape our understanding of ourselves. Much like adding ingredients to a bowl in order to make a cake – all our prior experiences build up to form who we are in any given moment. These would include the impact of sequences of experiences within and across all of the influences identified in the sections above. However, there is also a second aspect to Growth, and that is its relationship to the ‘Moment of Practice’. The Moment of Practice that we are considering – whether in research or through accountability observation – can be for the duration of a project, an individual day, a lesson, a section of a lesson, an input, an activity, a conversation or even a very precise interaction. Whichever unit of analysis we are focusing on will create experiences that will immediately feed back into the Funnel of Influence from The Self – specifically Growth, and shape the next Moment of Practice. Thus, Growth and the Moment of Practice are inextricably conceptually linked.

The collision point centres around the idea of Identity. However, more specifically, Identity as a Situational Self. In other words, Identity that is born out of the Substantial Self (see above), and manifest through the specific situation in the Moment of Practice – with all the influences outlined above at play. This draws heavily on the work of Beijaard, Verloop and Vermunt, (1999), Korthagen (2004), Olsen (2008), Beauchamp and Thomas (2009), Pillen, Den Brok and Beijaard (2013). The focal points of Identity as Situational Self asks who the teacher considers that they are in that Moment of Practice. What meaning do they conceive that they are making and why the teacher thinks they are doing and saying the things that they do - all consequent choices made as a result of all the influences above.

Bookmark this point, because we need to immediately ask – how can we (as a separate being) know what the teacher conceives internally. We will return to that point shortly.

The Funnels of Influence locates Situational Self as an influence upon (not subject to), Situational features of the Setting (remember earlier we were considering the Stable features of the Setting as explicitly located within the Context). This is because the Situational Self influences the Situational Setting. In other words, the role that the teacher believes that they have within the Moment affects the situation itself. This, in turn, creates what Twining et al., (2017), refer to as Possibilities. These return to the idea discussed above about Opportunities but applies a new lens to them - what available options does the teacher perceive as possible to them personally? This could include the nature of how a TA might be deployed or the ways in which the teacher conceives the use of available resources (e.g. a trolley of laptops). This will also include perceived expectations (what the teacher thinks is expected of them by the different actors), and what they perceive they can therefore do (Agency).

All of these influences are at play in every moment and every context that we all live our lives through. Arguably, whilst The Funnels of Influence has been born out of educational research it can also apply to any context that we find ourselves in. The question remains, how do we identify the Moments of Practice, and therefore how do we begin to extract evidence on this basis. To do this, we can examine a bounded Moment of Practice as seen through:

By examining these and more specifically, applying discourse analysis to them (more of which in another article!), we can then draw out what the teacher’s Implicit beliefs are. It is those Implicit beliefs that will be most revealing, and thus the most credible and robust form of evidence upon which to build findings. 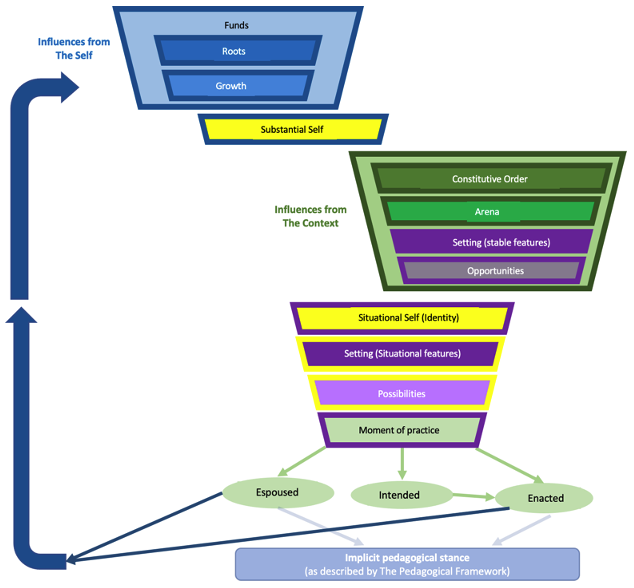 1 thought on “The Funnels of Influence (Part 2)”