This is my take on sociocultural theory, based on reading of relevant literature (e.g. Lave's work) and (most importantly) discussions with Prof Patricia Murphy, and with other members of the NP3 team. 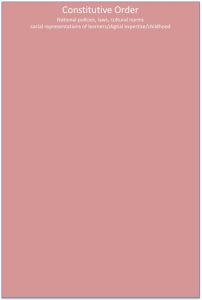 This is the wider social context - it encompasses policies, laws, and cultural norms, including social representations of things such as learners, childhood and social class. This is a construct that aims to encapsulate key enduring underpinning elements of 'the lived world' - in which 'taken for granted' beliefs and values are inculcated in social, political and economic structures. It is about the things that are often assumed/unchallenged but which colour how we view the world. It includes the generally accepted world view (e.g. neoliberalism), which in turn is reified (made explicit/concrete) through policies and social norms. Of course, the constitutive order may be different in different countries(e.g. contrast the social norms in Singapore, England and Finland), and may change over time (e.g. contrast views of homosexuality or racism in England in 1800, the 1950s and today). 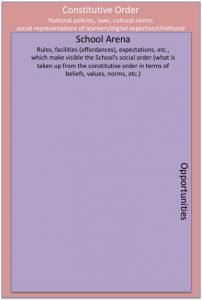 This is the second level of context - it is the local context within which activity takes place in 'the lived world'. It is defined by the enduring physical and social structures that set boundaries for the opportunities that there are for action.

The context might be a school (as illustrated in the diagram) or a home, or other space that includes enduring elements such as rules, facilities, physical resources, expectations, and norms of behaviour. The arena includes the elements from the Constitutive order that have been incorporated into this local context. Thus, for a school, the arena would include the physical spaces of the school grounds and buildings, the physical resources that are provided, the school rules and norms including how the day is structured (e.g. lessons, bells, expected behaviour in the playground), how people are organised (e.g. age based classes, class size, ability grouping, one teacher per class), and the nature of relationships (e.g. how hierarchical the organisation is, expectations about parental/community involvement).

Each school would have a different arena, as would each home, each supermarket, each sports club, etc.. 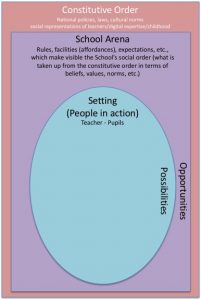 The third analytical level within my understanding of sociocultural theory is the setting. This is sometimes referred to as 'people in action' because it consists of the people within the arena. In the case of a school it includes the adults (e.g. teachers, teaching assistants) and children who are working together at a particular moment in time. Different people will see different possibilities within the arena because of their different past experiences. Thus, for example, a teacher who is very competent with digital technology and is comfortable being seen as a learner alongside the children will perceive very different possibilities in a classroom in which every child has their own mobile device if compared with a teacher who is nervous about their digital technology competence who likes to be seen as the expert by the children.

Like any analytical framework, this representation of 'the lived world' is a simplification. A static depiction of a dynamic system will always be a misrepresentation - it can only attempt to capture a moment in time for something that is emerging moment by moment.

It is also difficult to untangle the complexity of different individuals' social contexts. Is the constitutive order the same for a middle class agnostic white male who has always lived in England as it is for a muslim female refugee who have only lived in England for a few months? Probably not - but how do you capture those differences in a meaningful way?

You could also challenge the notion of there only being three levels within the representation. How does this capture what is happening, for example, if you have a class, within a school, within a district, within a country - which level equates with the constitutive order (is it the country, or the district), which level equates with the arena (is it the district, or the school), etc..

I think the key here is to see the framework (Constitutive Order, Arena, Setting) as a tool to help focus your thinking - so that you consider not only the obvious (often physical) structures that influence human action/interaction, but also the dominant (and often unquestioned or even invisible) social, cultural, ideological and economic influences on human action/interaction.