In my previous post on sociocultural theory I attempted to explain the three analytical levels of context (constitutive order, arena, and setting). The setting is about people in action - it is about the interplay between the identities of the people involved and the opportunities made available by the arena.

Your identity is your view of where you belong within a community of practice.

A community of practice is an enduring collection of people who are mutually engaged in a shared endeavour - working towards a shared purpose. Thus, doctors would be seen as being a community of practice - in that they share the endeavour of preserving people's health through the use of medicines, therapies, operations and other sorts of medical interventions. Being part of a community of practice doesn't necessitate being physically colocated - the doctors could be in separate hospitals or even countries - it is about having share purposes, valued ways of working and ways of thinking about their practice. As someone learns to be a doctor, they learn the norms and expectations of that community and the ways of working that are valued by other doctors - this is the process of developing their identity as a doctor. 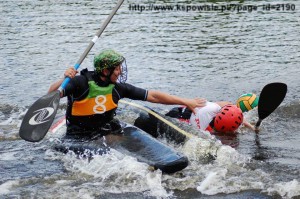 valued sets of practices. Those purposes and valued ways of working are different across these two communities of practice - trying to push a fellow academic on the shoulder so that they fall over would probably not be seen as appropriate unless we were both playing canoe polo at the time.

As we each belong to many different communities of practice, we each have multiple identities. I am not the same person when I am playing canoe polo as I am when I am giving a keynote speech or engaging in an academic discussion. Not only because the things that it is appropriate for me to do are different, but also because my degree of belonging to each community is different. My level of integration into these two communities isn't the same - in one I am seen as being pretty incompetent whilst in the other I am often viewed as being an expert (I'll leave you to decide which is which).

Of course there are elements of me that seem pretty stable across contexts, such as my height and my tendency to want to challenge traditional thinking - whether that be about the best way to throw the ball (loopy shots are my speciality) or how best to support children's learning in school.

Your identity mediates what you see as being possible within a setting (as explained in my previous post). In the context of a school, there are usually multiple players within a setting - the teacher and children (and perhaps other adults such as teaching assistants or parent helpers). Thus the possibilities within a setting are an interaction of the opportunities offered by the arena and the degree to which 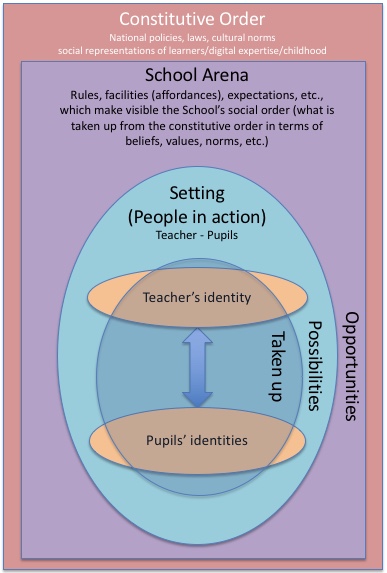 different players within the setting see themselves and each other as being able to act in specific ways. For example, a teacher who lacks confidence in using digital technology may still see the possibility of her students using it to enhance their learning because she recognises the children's digital competence and is comfortable for them to be more expert than her in that area.

What is taken up in a setting depends upon the choices made by the participants in the setting from the range of possibilities that they perceive.

This is all well and good (at least if my understanding of sociocultural theory is sound), but you might reasonably ask 'What use is this sociocultural framework?'
I will attempt to answer that question in some subsequent posts ...