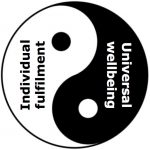 In a previous post I introduced the Yin-Yang Vision (Individual fulfilment and Universal wellbeing), and highlighted the importance of your underlying assumptions for your mission, strategies and intended outcomes. In this post I set out some of the core assumptions underpinning the Yin-Yang Vision and start to unpack the vision by clarifying its key intended outcomes.

The Yin-Yang Vision is underpinned by a sociocultural theoretical framework. Implicit within this are beliefs about how people learn and about identity.

The intended goals within the Yin-Yang Vision are also underpinned by the following assumptions:

The high level statement of the Yin-Yang Vision (Individual fulfilment and Universal wellbeing) encapsulates a range of key elements if you accept the assumptions set out above:

Sociocultural theory views knowledge as being the ability to act in valued ways within particular contexts (communities of practice), and sees identity, agency and participation as critical.

Individual fulfilment is dependent upon the individual feeling valued, hence the importance of recognition and success. We know that following one's passion is fulfilling. However, life is challenging, and success is more likely to come to those who are resilient and persistent.

Universal wellbeing is dependent upon being able to balance the needs of all people. This involves thinking about the values that different people share, and seeing the inevitable diversity in beliefs as being a strength not a weakness. Clearly, universal wellbeing is dependent upon people feeling that they are being treated fairly, which is about equity and respecting people's rights. Universal wellbeing cannot be achieved without creating a sustainable world. Sustainability is thus about the wellbeing of the planet, and thus includes respecting the rights of rhinos and other living things.

Whilst we cannot predict the future, we can be pretty confident that addressing the challenges facing humanity will require communication, collaboration and creativity as well a high level of problem solving skills. Digital literacy will also be critical given the growing impact of digital technology on society. We can also predict that change is going to continue in the future, some would argue increasingly so over time. Thus, perhaps one of the most important intended outcomes within the Yin-Yang vision is learning to learn. 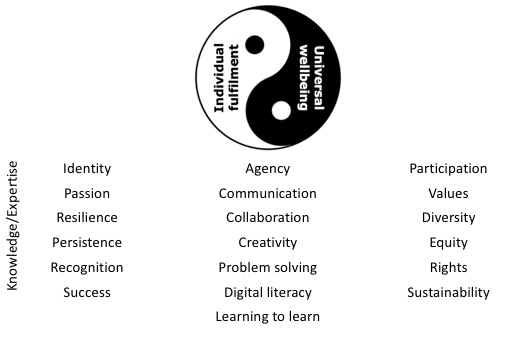 1 thought on “Unpacking the Yin-Yang vision”