There is a lot of talk about gamification in education and to a lesser extent using real games to enhance learning in schools. By real games I mean ones which have been developed for the leisure market, their primary focus being on entertainment rather than learning. Findings from the NP3 research suggested that the use of real games in normal lesson time was limited.

There were several examples of real games being used in clubs (e.g. Wii Fit to improve health and fitness) or for out of classroom activities including homework (e.g. Minecraft to design a roman forum or model of Stonehenge).

The only uses of real games during normal lesson times that were evident in the NP3 research were in English/Literacy lessons. These ranged from using basic apps such as Boggle (which involves finding words in adjacent letters in a grid) through to simulations and immersive games (e.g. Myst, Epic Citadel and Temple Run) as a stimulus for writing. 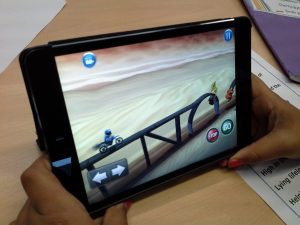 In Highden Primary (pseudonym) they used Bike Baron [a motorbike stunt/jumping game]. Over three days the children played the game, then took screen shots of different parts of their best run (start, middle, end). They discussed their screen shots and developed a commentary of their jump. The three pictures were then made into a comic strip with associated written commentary. They then did an extended piece of writing in their exercise books. The teacher commented that having played the game "they wanted to write".

The ICT Coordinator at Highden Primary described how they had used Epic Citadel:

So this is one of the apps Epic Citadel, which I’ve used for a couple of years [shows app to researcher] ... and what it is, it’s a medieval world, and there are people in there, and its limited what you can do, but there’s sounds, and so all we do is virtually explore it and describe it. You know you can describe the turrets, there’s a bell there, ringing away. That rotates around so that... [Showing app to researcher] and what we do as we go on we actually start outside... so what it does it actually brings you to this place to start off with. So we can talk about mood and how we feel and how things change. I think, I’m sure the music is Peter Gabriel, so they had a say in this from the gaming world. {It’s very atmospheric} Yes, and that’s what it is, we always say ‘oh what can we see, what can we feel, what can we hear, what can we taste’, and that’s everything off. So you know, the children end up opening their eyes, and what I tend to do is I tend to have a PowerPoint of this and then some music on, put some music in the background, and then I superimpose the two, and suddenly they’re in the real world, and they’re moving around, and they can describe everything, and that’s what we do. We spend a week on this, but I’ll show you some examples of it [see below] and... I would say probably the thing I like about this, the first, certainly in Year 6, this is the first one to get their hooks into for the moods and it’s all about settings. And then what they do they go up to the citadel or the church as they say, they describe that and we finish off in here, and they actually in time, they’ve come up with the... they’ve changed the mood they talk about Gregorian chant music. You’ve gotta remember these are all Year 6s, so, so... It’s just two doors either side, and then they go into the main chamber... and it blows their mind sometimes, some of them get a little bit frightened actually, but err, I think this, I think they call him the pilgrim, so they’ve got to come up with an idea where he came from. You can see, and I can give them the iPad, and they can create the journey as they go along so it’s that interaction as they go along so it’s all part of, they own it basically they own the story, but they could write for weeks. You know, you’ll start with this and they could write for a day, and that’s the good thing about it. 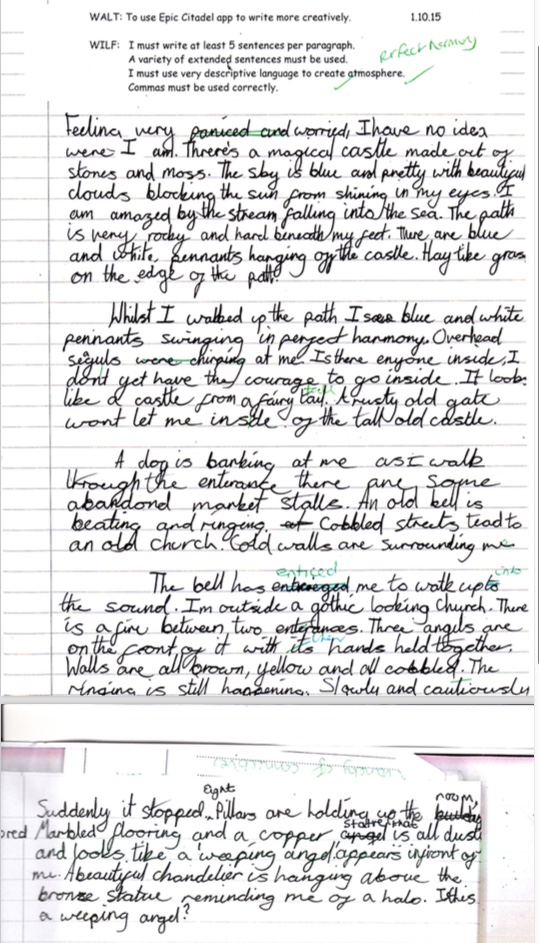 However, the assistant head at Stepside Primary, where they also used real games (mostly outside normal lessons), had some reservations about their use in school:

We did a really interesting session with volume of shape using Minecraft with the Year 6s ... and at the end of the session we asked one question and we said how was it doing your maths in Minecraft and using Minecraft? And two of the boys said “I’d rather have just played Minecraft”. So, there is that element. It’s a really fine line between taking away what they have personally {Yes} in that fine enjoyment and us using it as an educational tool. Well in that whole danger, I get really uncomfortable about the kind of formal, informal conversations people have about schools should take more advantage of the informal and actually what they do is they formalise it. {Yeah and they completely undermine the entire} because they wrap it up in learning intentions and success criteria rather than just letting the children explore learning in a different way. And the elements of thing, yeah we were playing Temple Run and we were doing some amazing stuff in terms of writing, but we’ve taken, in some ways, the fun out of Temple Run.

So, whilst there is potential to use real games to enhance formal learning, you do need to think carefully about the extent to which this is undermining what makes the games engaging in the first place - and thus reducing their power as learning tools.

For more on using both real and educational games in school see pages 120 to 125 of the NP3 Report (download the pdf).